Trigger warning: this piece contains sensitive content that some people might find upsetting. Reference to sexual violence and rape.

We met up with two members of the Rosey Project Community and their support workers Jen and Emma back in February of this year to talk about a series of zines they created that are a resource for other young survivors of sexual violence.

If you haven't already, you can listen to the conversation from our meet up on the WASLER ARTS MAKE WAVES podcast, Episode 14. Our conversation touched on lots of issues relating to sexual violence such as consent, media representations and narratives around sexual violence and harassment, accessing support, how trauma affects the brain. The RPC members voiced how important they felt it was to have better education for young people on sex, consent and healthy relationships. They also spoke about how finding support and being in a community of other survivors had been a source of comfort and helped to take away feelings of shame.

Depressingly, victim blaming and a culture of impunity still strongly persists, along with toxic notions of masculinity that encourage violence, dominance, control and power. If we're going to end rape culture and violence against women perpetrators must be held accountable, and the language and attitudes around sexual violence, sexual harassment and rape need to change so as not to normalise the sexual objectification of women and place fault with the victim.

These statistics from UN Women show how pervasive sexual violence is and how often these crimes goes unreported;

Approximately 15 million adolescent girls (aged 15 to 19) worldwide have experienced forced sex (forced sexual intercourse or other sexual acts) at some point in their life. In the vast majority of countries, adolescent girls are most at risk of forced sex by a current/former husband, partner or boyfriend. Based on data from 30 countries, only one per cent ever sought professional help [7].

One in 10 women in the European Union report having experienced cyber-harassment since the age of 15 (including having received unwanted, offensive sexually explicit emails or SMS messages, or offensive, inappropriate advances on social networking sites). The risk is highest among young women between 18 and 29 years of age [10].

Having support and prevention programmes like the Rosey Project is vital in providing safe spaces where victims are believed and their experiences validated, and in giving young people the tools to make healthy, informed decisions around sex, their bodies and relationships.

The Rosey Resources are great as they are not just a clinical document for survivors, but have been created by survivors with their experiences and voices at the forefront, making them more relatable for others going through similar experiences. RPC members shared how making the zines had been a creative outlet for them and an empowering process. Here are some excerpts from the zines 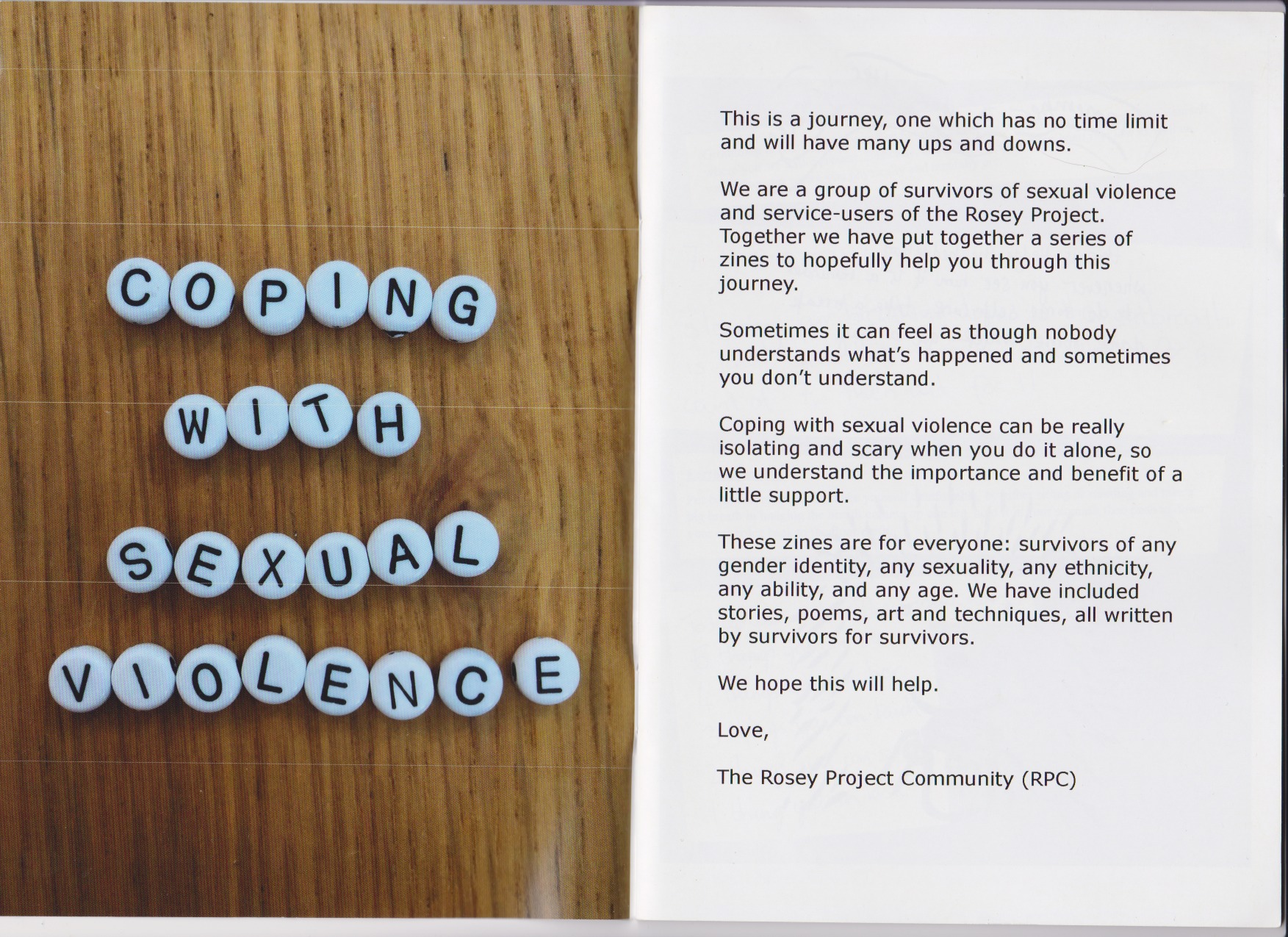 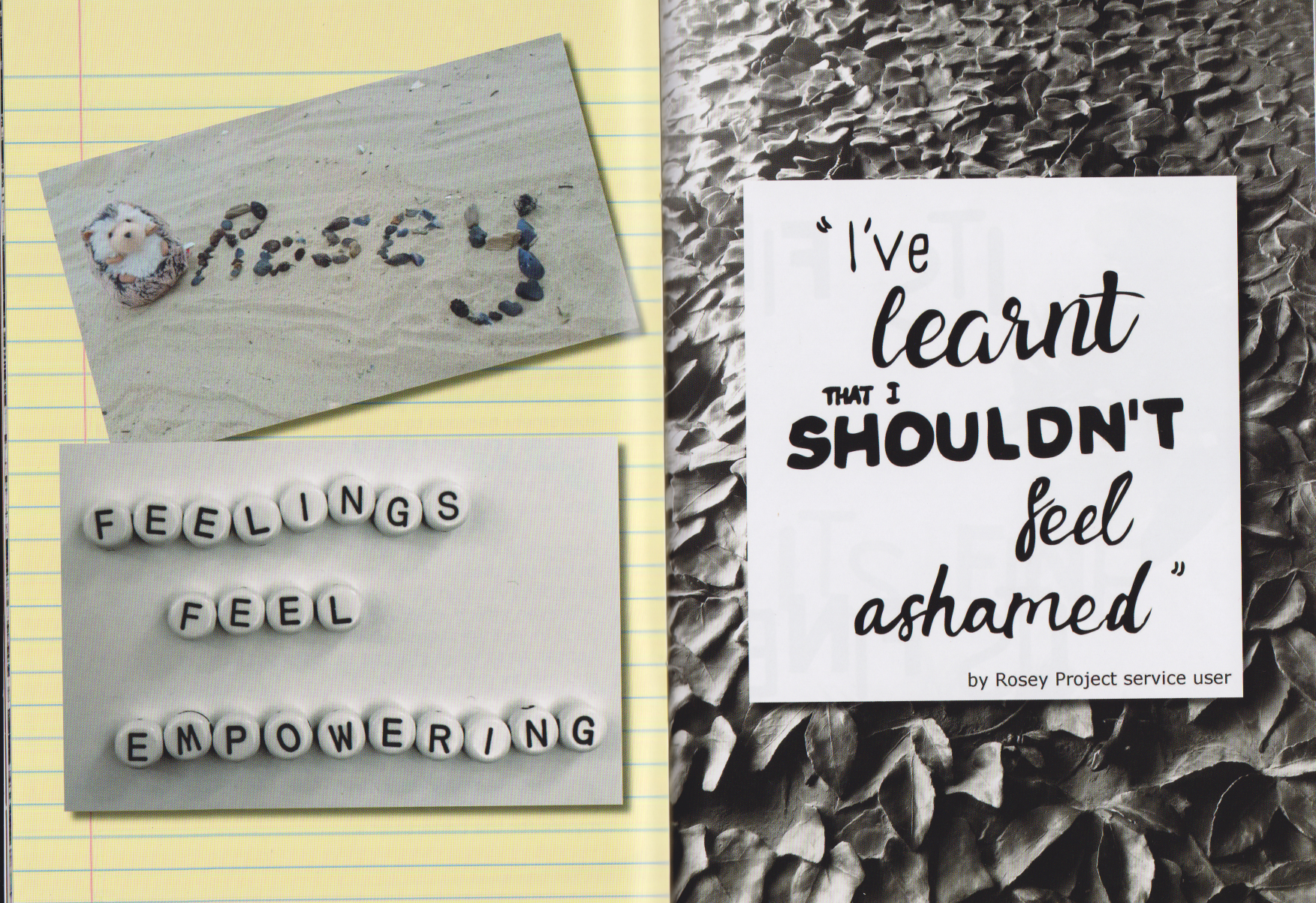 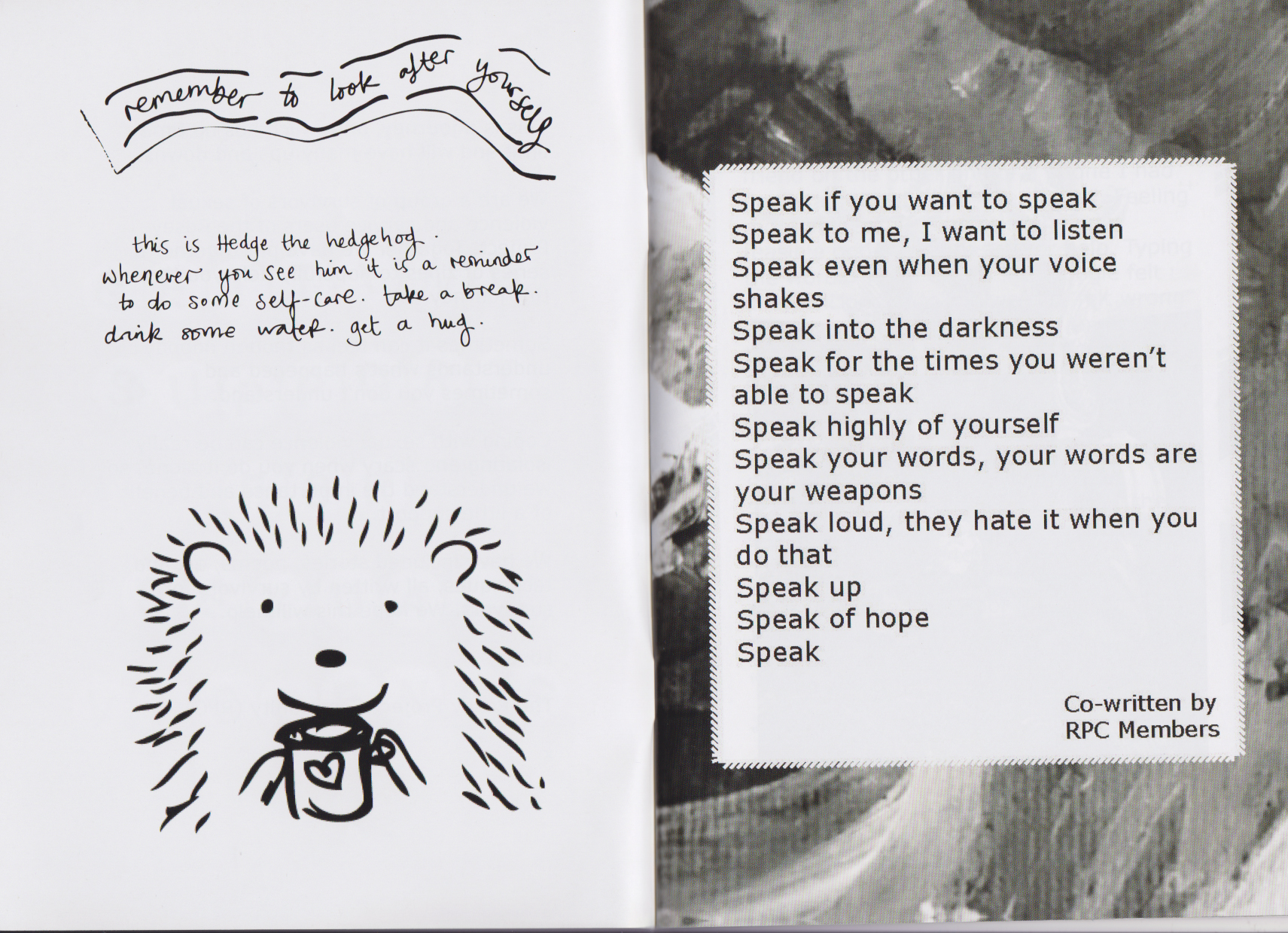 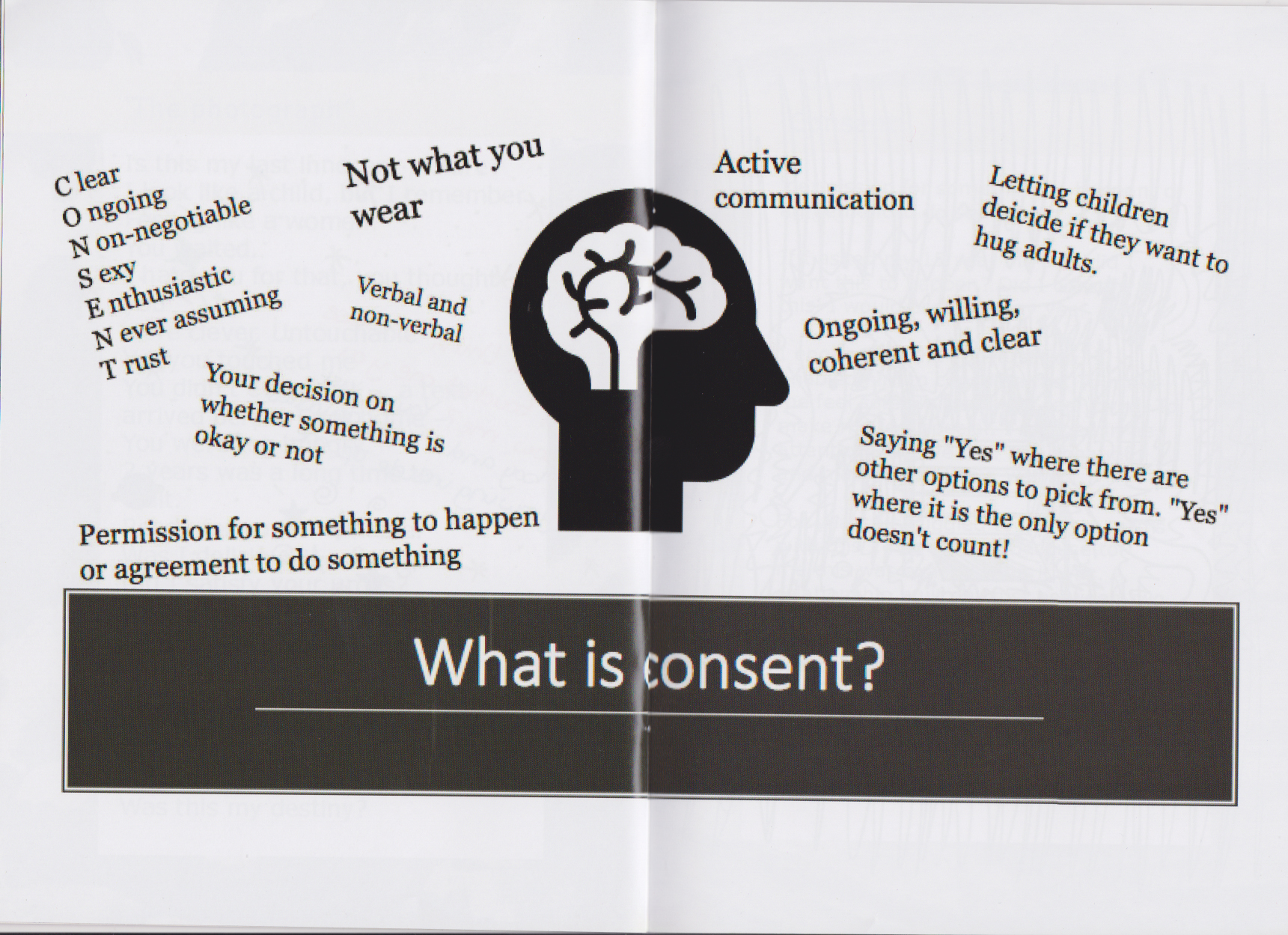 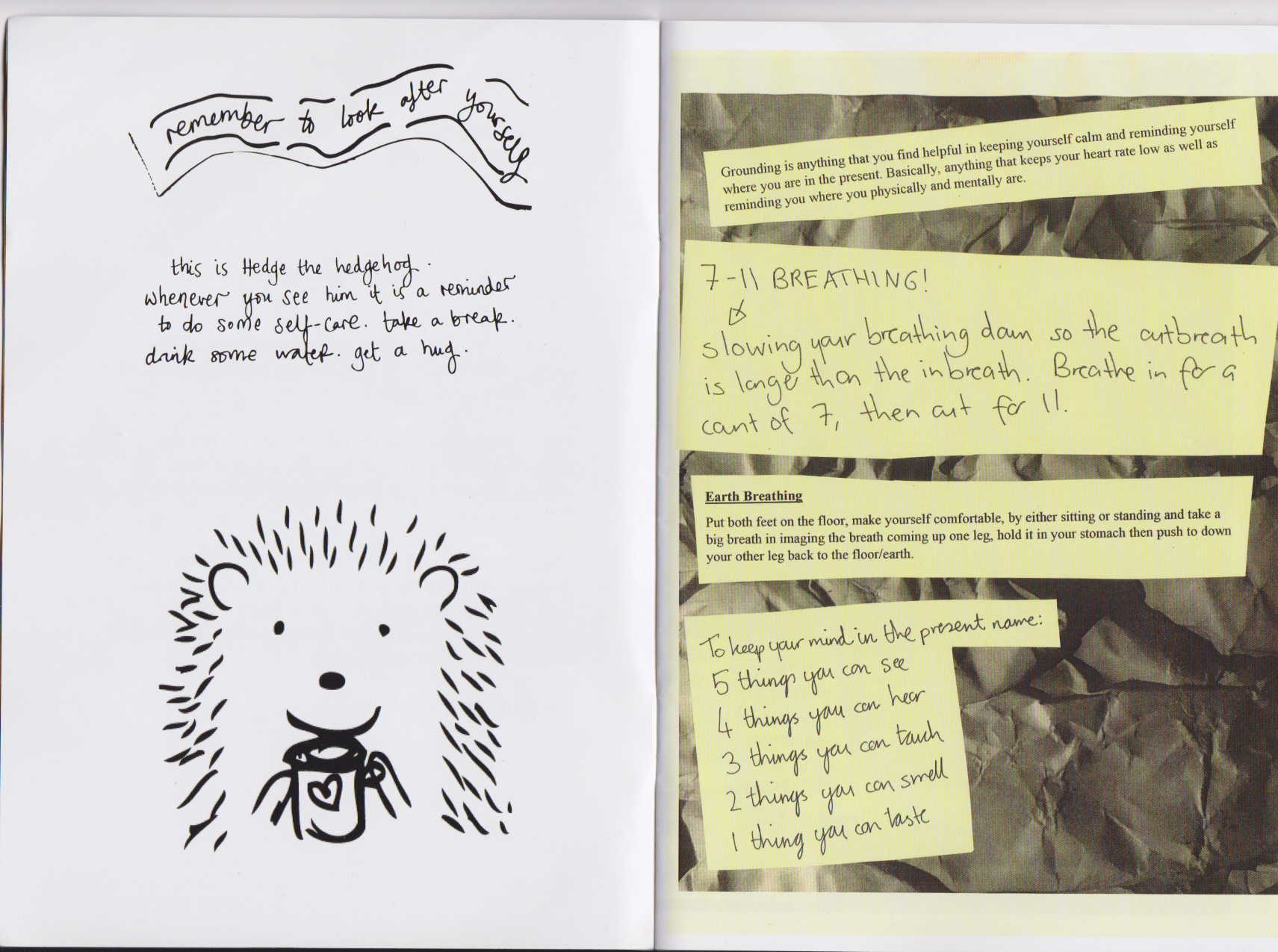 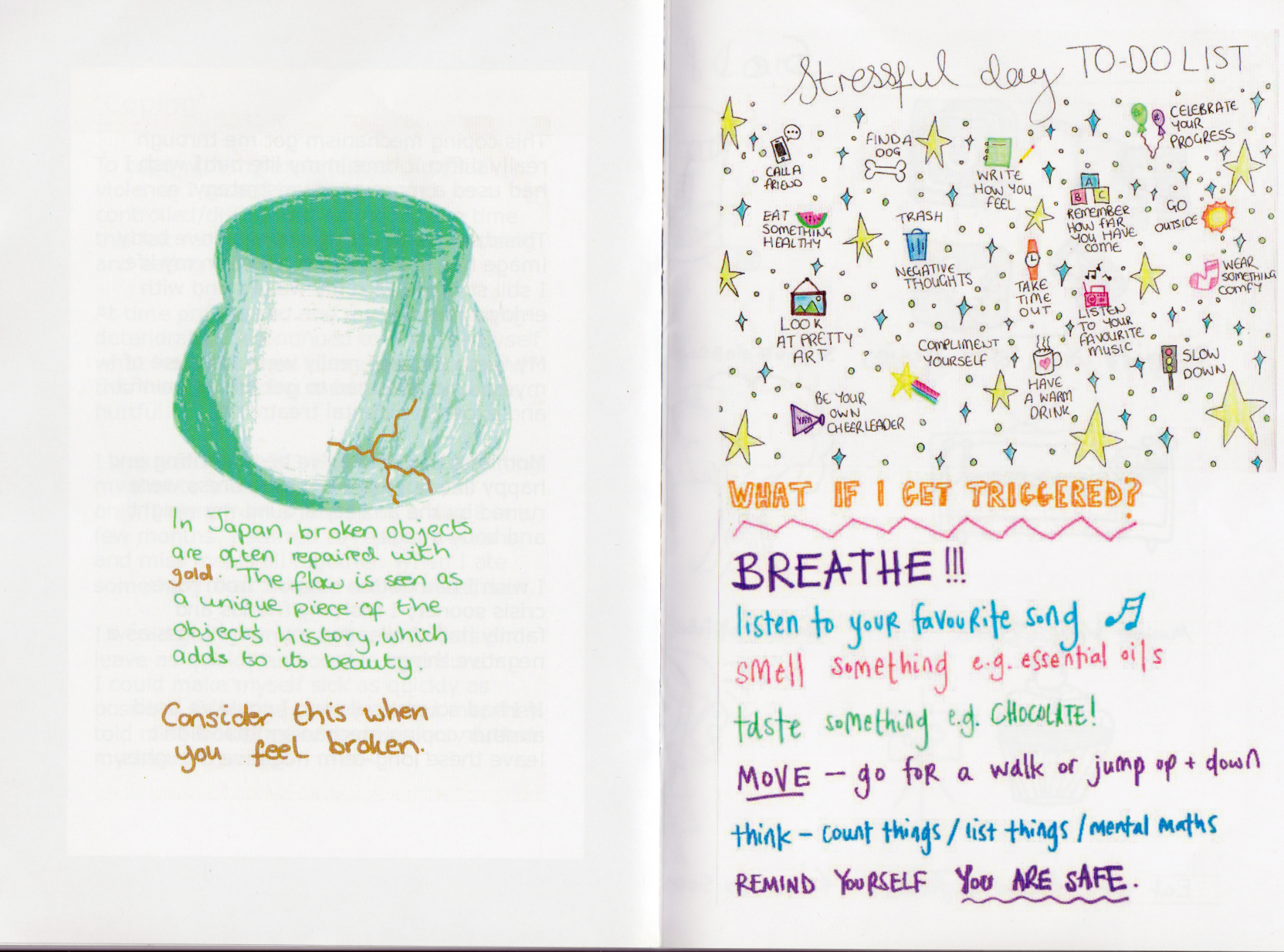 Zines have historically been a means for alternative, creative and dissenting voices to find expression, community and political agency. The Women's Suffrage spread their word and political aims through pamphleteering, the zines of the Underground Press in the 1960's and 70's were characterized by a synergy between outspoken political commentary, literary experimentation, heartfelt critiques of rock and roll music, influence of drugs on visual communication, and revolution in layout and design (1). Spare Rib magazine and Red Rag evolved out of the Underground Press and the emerging Women’s Liberation Movement. Spare Rib ran from 1972-93 and challenged the stereotyping and exploitation of women, while supporting collective, realistic solutions to the hurdles women faced (2).

Making zines was largely part of later countercultural movements such as Punk and Riot Grrrl with it's Do It Yourself ethos. Cheap methods of production, using photocopiers enabled people to easily self publish and bypass mainstream publishers and distributors. This video from the Yerba Buena Center for the Arts reflects on zine making during the 1990's Riot Grrrl movement, and how for many it was an entry point to different forms of activism and expression.

See Doug Blandy's Zine Timeline for a more detailed picture of how Zine making has emerged. Sarah Dyer's essay 'A Brief History of My Life in Zines' details the birth of the girl zine movement that flourished with the Riot Grrrl movement and 3rd wave feminism. And there's lots more info on The Global Grrrl Zine Network –Grrrl, lady, queer, and trans folk zines, distros and Do-It-Yourself projects from all over the world.

Zine's aren't always overtly political in content, zine-making has also grown out of artist book making, artist's small publications and Mail art. Many contemporary zines are concerned with aesthetics and the formal and material aspects of a book/publication. This short documentary shows the different approaches to making zines.

It's International Zine month this July so if you fancy trying your hand at creating your own zine click here for pointers on how to get started.

"Zines...challenge the easily digestible mainstream media. They can open students' eyes to other outlets for information, showing alternate sources and forcing students to see how the accessible information that is often just taken for fact also has origins and agendas." - Amy Wan, "Not Just for Kids Anymore: Using Zines in the Classroom."

Art can be a powerful means of altering perspectives, challenging social and cultural norms and dominant systems of power. This can be seen in the work of Suzanne Lacy whose socially engaged and public performance art has often addressed and brought to public attention sexual and domestic violence against women and girls, as well as other forms of social, racial, gendered, and economic inequality.

Lacy is an American artist, educator, and writer, professor at the USC Roski School of Art and Design. She attended California State University located in Fresno in 1969, taking up graduate studies in psychology. At this university, Lacy and fellow graduate student Faith Wilding established the first feminist consciousness-raising group on campus. This lead up to her attendance in Judy Chicago's Feminist Art Program during the Fall of 1970. The 1970s became a period where Suzanne Lacy continued to explore identities, women's bodies, and social conditions.

Three Weeks in May: Speaking Out On Rape, A Political Art Piece was an extended work of performance art and activism by Lacy. The piece exposed the extent of reported rapes in Los Angeles during a three-week performance in May, 1977, and consequently prompted the police and the city government to address violence against women openly and to publicize rape hotlines.

This film documents Lacy's performance piece Three Weeks in May.

In 2012 Lacy modified Three Weeks in May for the Getty Pacific Standard Time Performance Festival in a new project called Three Weeks in January, which continued the dialogue about rape in Los Angeles. It included presentations, conversations, and a performance called Storying Rape (watch here).

"Storying Rape was a performance featuring new media and old, taking the form of a choreographed conversation at the top of Los Angeles City Hall that focused on the current state of rape narratives and the opportunities for persuasion that might be found in alternative narratives. Nine leaders in media, city politics, theory, service, law enforcement and activism considered how the narratives describing the act of rape are presented in various spheres, and how reframing these narratives might improve public understanding of violence against women. Filtering their ideas through the lens of narrative theory, participants discussed how changes in existing stories might yield new insights on violence prevention. Around the outside of this conversation witnessed by a small invited audience, a ring of 15 social media reporters communicated the conversation to the outside world, translating the private conversation into digital communication via each individual reporters’ perspectives. This was the culminating performance within the Three Weeks in January project."

Storying Rape: Shame Ends Here grew into another art project produced for the Liverpool Biennial in 2012, promoting a public conversation in the English city about rape violence, education, and prevention.

Lacy's art is hugely inspiring in it's capacity to effect change in everyday life. Voice and listening are central to her work; she has consistently created spaces for dialogue, breaking down social barriers (of age, class, race, experience) and encouraging greater understanding of our relationality and ecologies.

I have an ethical obligation as a person to make the world more equitable.

The members we spoke to from the Rosey Project Community emphasised the importance of open discussion and education around sex, consent and relationships, and the need for greater literacy of visual culture: advertising and the media. Greater accountability, and as Lacy's Storying Rape performance highlights, changing the language and narratives around sexual violence are also key. These are just some solutions to a complex problem that is deeply embedded in patriarchal and capitalist structures.

For last years 16 Days of Activism, UN Women launched the UNiTE campaign, Generation Equality Stands Against Rape, to try to tackle this global problem. The campaign runs over two years. With the first year of the campaign's efforts aiming to highlight "the issue that has been identified as one of the key challenges in prevention and eradication of rape and sexual harassment – the issue of consent." The second year of the campaign "will mark another milestone for the work on ending violence against women and girls: 20 years of the United Nations Council Resolution 1325 on women, peace, and security. The United Nations Security Council (UNSC) adopted Resolution on 31 October 2000 which was a milestone in addressing violence against women in situations of armed conflict. Recognizing the need to fully implement laws that protect the rights of women and girls during and after armed conflict, it calls for special measures to protect women and girls from gender-based violence in armed conflict. It also emphasizes the responsibility of all States to put an end to the impunity of perpetrators."

Here are some of the UN Women's suggestions on ways to stand against rape culture.

The Rosey Resources are also a reminder that whilst we're working for change and dealing with the difficulties that life throws at us, we need to take time to look after ourselves and practice self care. And even though we may feel alone, there is help out there, there are others who understand and who want to support us through challenging times.

If you are a young person looking for support you can call the Rosey Project freephone helpline on 08088 00 00 14.

Thanks to the members at RPC and to Jenny, Paula and Emma. If you want to get copies of the zines you can get in touch with Paula the team leader at the Rosey Project by emailing paula@rapecrisiscentre-glasgow.co.uk, or by phoning the office on 0141 552 3201.  You can also get PDF copies of the zines by emailing:

(1) A Brief History of Zines Adapted and expanded from a timeline by Doug Blandy, Sallie Bingham Center for Women's History and Culture, Duke University Libraries

Below you can read Grace's poem 'I See You', that she shares in episode seven of the podcast. You can also find more of Grace's poetry in the publication 'When Women Speak I Hear...' An anthology of p

EP.7 PODCAST: OUR WALK TO FREEDOM